Showing posts from May, 2012
Show All

Roland Engan MIRI: PKR Baram branch believes it is most unfair for other party to make arbitrary decision for the people affected by the proposed Baram Dam project. It was announced in the media by FORUM president Gerawat Gala and Deputy Chief Minister Datuk Patinggi Tan Sri Alfred Jabu last week that the people in Baram had agreed to the construction of the Baram Dam. “We believed that Gerawat and Jabu were merely expressing their personal views on the subject,” said PKR Baram branch deputy chairman Roland Engan in a press statement received here recently. He stressed on the importance of going to the grounds to gauge the real sentiments of the affected people like what he and his team did from May 12 to 17. “Their statements do not reflect the actual situation on the ground. That’s what they told us when we visited them last week,” said Roland a lawyer based in Kuala Lumpur. He is a Kenyah from Long Jeeh one of longhouses to be affected by the constructio
Post a comment
Read more
May 28, 2012 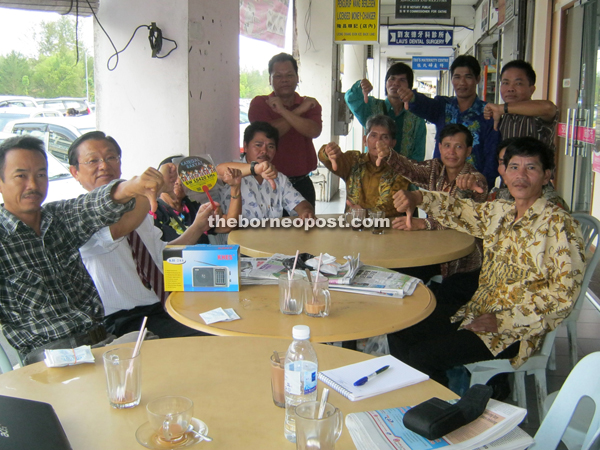 ‘NO’ TO PROPOSAL: Orang Ulu community leaders show their disapproval of the Baram Dam. At second left is Dr Teo.   MIRI: The government was yesterday told that Baram needed a good road instead of a hydro electric dam. In a press conference held at PKR Miri office here, Orang Ulu community leaders Ketua Kaum (KK) Bilong Oyau from Long Sait, KK Balang Toi from Long Lamam, KK Ramat Teliap from Long Murung, KK Sia Ngadau from Long Kerong, KK Yesaya Arah from Long Ajeng, KK Uyo Arah from Pengaran Kelian and KK representative Thomas Pelutan from Long Sbigen said they were strongly against the building of the proposed Baram Dam. Miri PKR chief Dr Teo Yu Keng was present to hear their grouses. According to Thomas, not a single longhouse in upper Baram wanted the dam to be built. He said those who claimed to represent Federation of Orang Ulu Associations Malaysia (Forum) in supporting the dam project were not from the affected longhouses. “We don’t want to flood our long
Post a comment
Read more

LONG SAN, BARAM – About 60 participants, representing their respective villages from Upper Baram, Patah, Akah and Silat rivers strongly voiced their objection to the proposed Baram Hydro-electric Dam Project after attending a 11/2 day workshop organised by Save Sarawak’s Rivers Network (SAVE Rivers) at Long San village. The workshop, entitled “Empowering the Community to Assert their Rights”, objective is to educate the communities affected by the proposed dam project on their fundamental rights under the Federal Constitution, the United Nations Declaration on the Rights of the Indigenous Peoples (UNDRIP) and the concept of Native Customary Rights (NCR) under the Sarawak Land Code. The workshop also touched on the topic of good governance, government policy on customary land development and encouraged the participants to voice out their concerns and demands with regards to the proposed dam project. SAVE Rivers is happy to note the positive response to the worksho
Post a comment
Read more

Who is Jabu to represent us?

Cursed Baram Dam Ep6: What Development Means to Us

MIRI – About 40 people from Baram are calling for their community leaders to resign from their respective post if they are not interested in listening to the voices of the people who oppose the proposed Baram Dam project. The group headed by Stephen Satie and Dominic Langat (left) made the call after having a meeting at Telang Usan Hotel, Miri to discuss about the latest statement made by The Federation of Orang Ulu Association Malaysia (Forum) in the Borneo Post last Friday (18 May) headlined “Community support for Baram Dam”. “We want our community leaders to listen to our voices and not just listen to the politicians. We put our trust on our community leaders to look after our rights and interests and it is their responsibility to look after the well being of their community. If they are not capable to carry out this responsibility and are only interested to carry out the orders of the politicians, then they must resign,” said the concerned Oran Ulu group jointly
Post a comment
Read more

May 21, 2012
BRUNO MANSER FUND, BASEL, SWITZERLAND 18th May 2012 – for immediate release Andrew Pattle, project director of the Baram, Baleh and Murum dams, says “safety and environmental compliance are not given much importance” in Sarawak – Bruno Manser Fund asks Hydro Tasmania to cut its business ties with the corrupt Taib government (KUCHING, MALAYSIA / HOBART, AUSTRALIA) Andrew Pattle, the Australian project director of three dam projects in the rainforests of Malaysian Borneo said that “safety and environmental compliance are not given (…) much importance” with dam-building in Malaysia. Pattle’s astonishing statement, which he made in Hydro Tasmania’s latest annual report, has been highlighted yesterday by Sarawak Report, a well-known whistleblower website. Pattle, a long-term Hydro Tasmania executive, is currently “on secondment from Hydro Tasmania to Sarawak Energy Berhad” in order to help the Sarawak state government realize a highly controversial dam p
Post a comment
Read more

May 21, 2012
Posted Thursday, May 17th, 2012 This post is also available in: Malay The Green Party in Australia is demanding explanations from Hydro-Tasmania about what exactly its subsidiary Entura is up to in Sarawak? Investigations by Sarawak Report have revealed that Entura, which acts as a consultancy arm of the publicly owned company, has become deeply involved in a whole range of projects linked to Taib’s plan to flood Sarawak with 12 new dams over the coming years. Speaking yesterday in Tasmania’s State Parliament, the Greens’ Energy Spokesman, Kim Booth, criticised the failure by Hydro-Tasmania to provide proper disclosure about these controversial ventures, which involve flooding huge areas of the Borneo Jungle and displacing hundreds of thousands of native people. We have already disclosed that Entura have taken on the management of the inundation of the new Bakun Dam, for example, advising on safety issues and the structure of the Dam. Hydro-Tasmania has
1 comment
Read more

Listen to the voice of Baram

VOICES OF BARAM: Anthony (left) and Ding. MIRI: The government must listen to the voices of people affected by the Baram Dam project, especially elderly folks and residents in Baram who have much to lose. Some RM5 billion is to be spent constructing Baram Dam, which will lead to a loss of homes, buildings, landmarks and good agricultural land besides Baram River. “The government must listen to the voices of those affected by the Baram Dam, and not claim to speak for all of them,” said a former four-term Baram councillor Anthony Lawai Karing, 72, recently. Anthony comes from Long San which is the heart of the Kenyah homeland under threat of destruction from the mega dam project. He lamented the potential loss of his clan’s properties in Long San which included businesses like lodging house, canteen, MAS ticketing agent office, and his PBB service centre when he was a councillor and PBB Baram information chief. Irreplaceable and priceless landmarks like the t
Post a comment
Read more

LISTEN TO THE PEOPLE’S VOICE: (Back row from second left) Peter and Philip joined by others in holding a peaceful demonstration concerning Baram Dam at the venue where a closed door meeting was held for the project. MIRI: The Baram Protection Action Committee is appealing to both the state and federal governments to scrap the proposed Baram hydroelectric dam project. Its chairman Philip Jau claimed that the majority of the people from 26 villages affected by the project opposed it. “Only certain village headmen and community leaders have agreed to the proposed dam. They have not been fully briefed on its advantages and disadvantages. “If our community leaders, our Temenggong and penghulus, cannot defend our rights then they should resign. That is why we insist on seeing them here, including Senator Lihan Jok,” Philip told reporters on Friday. Philip and Peter Kallang, chairman of SAVE Rivers Network, were among a score of people from Baram who demonstrated p
Post a comment
Read more

May 02, 2012
28 April 2012 The mayau dalleh ritual held last Saturday to enable the commencement of work on Baram dam may 'backfire' on the government. MIRI: The majority of the Orang Ulu community leaders in the Baram district are against the construction of the proposed Baram hydro-electric dam but are helpless against the state government and its agencies. Speaking to FMT, a community leader from Long San Johannes Luhat said the dam will turn Telang usan into a “1Malaysia grave” and will drown their culture, roots and civilisation. He said that the longhouses of some 20,000 natives from 25 villages, who will be relocated, will be drowned along with 38,900 hectares of their native customary rights (NCR) land. “The Baram dam will kill our civilisation, our culture and our roots. All our NCR land, pemakai menua, pulau galau, longhouses, churches and schools will be drowned. “All these things that are so dear and mean so much to us are forcibly taken away from us an
Post a comment
Read more

DJ disciplined for an act which he never did

May 02, 2012
I am sad and disgusted to learn that Mr. Jude Juda Anye (JJ) a Kenyah Discs Jockey (DJ) at Radio Television Malaysia (RTM) Miri is being unjustly accused and penalized. I think that it is an unwarranted penalty which is made in a haste; it is a coldhearted and reckless reaction spurred by a simple, one minute phone call which I made to the RTM Kenyah telephone called-in radio programme. From that call JJ was accused of collaborating with my campaign which is against the construction of mega dams in Sarawak. JJ is never a part of my campaign team nor has he ever collaborated with my team in our campaign in any way. We in the SAVE Rivers network respect the position and role of the civil service and thus never invite any civil servant to work with us. JJ was on duty on the the 20th of March 2012. He was taking phone calls for the programme as usual, when I made my call. Like all others that day, I asked permission while on the air to be allowed to give my message. JJ allowed me to do so.
1 comment
Read more
More posts