Showing posts from July, 2012
Show All

It seemed a bit like Mission Impossible. The task: to get Dan Kammen, UC Berkeley professor and expert of clean energy, into Sarawak in a day to accommodate his short trip to Borneo. The date: June 4th, 2012. The problem: this date coincided with school holidays and Gawai Dayak, which meant that there were no flights available in short notice into Sarawak (the Manager of Civil Society Initiatives and Wildlife Conservation herself could not return home in Kuching to celebrate the festivities with her family). Heading up the Baram river, slated to be dammed The Dayaks of Sarawak usually celebrate the end of the harvest festival during the mid-year, that is around June. June 1st and 2nd in particular are considered the official Gawai Dayak celebrations, and are public holidays in the state, thus many Sarawakians return home to their villages to spend time with their families. Read more at http://www.leapspiral.org/main/save-river-mission-impossible/
Post a comment
Read more

July 05, 2012
31 August 2011 Baram Dam: Lying govt and big companies Joseph Tawie Local village headmen are being told that the government has shelved the construction of the Baram Dam. The deceitful and insidious manner by which the state government is going about with the construction of the Baram Dam has angered the Orang Ulu communities in the dam project vicinity. Orang Ulu National Association Miri (OUNA) chairman Pete Kallang said: “As one of those affected I just can’t understand this injustice and this outrageous and abusive exploitation. “Why, it could be seen as an act in complete disregard for our well-being and opinion. “This could be proven by the priority given to the preparatory construction activities done even before the proper Social Impact Assessment (SIA) and the Environmental Impact Assessment (EIA) are completed or perhaps not even started and made accessible to affected and interested parties. “In doing this, it seems the construction of the dam is t
Post a comment
Read more 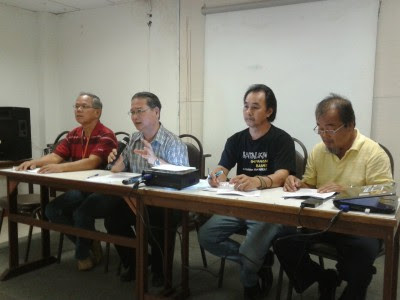 No Dam for the Baram: Powerful statement from the chairman of the Orang Ulu Association in Miri This press statement was released on the 29th of August,  2011.  “Flood from the dam and the infrastructure associated with the construction will definitely bring irreparable damage to the whole environment. It will destroy a heritage for which all Malaysian or human race should respect and harness.” For more information on mega-dams in Borneo, please visit: http://borneoproject.org/our-work/ongoing-campaigns/stop-the-dams ******* NO DAM FOR BARAM   Besides the colossal environmental devastation and severe consequence on the ecosystem that the dreadful Baram Dam will bring, it will also rage a permanent degeneration of the ethnic identity and heritage of the populaces who live in the region. Based on the number of villagers, the most affected are the Kenyah followed by the Kayan and Penan population. These are also the same majority groups of people who are
Post a comment
Read more

July 04, 2012
Miri: Save Sarawak’s Rivers Network (SAVE Rivers) refutes the CEO of Sarawak Energy Berhad (SEB), Torstein Dale Sjotveit’s claim that SEB has conducted studies on the area for the proposed Baram dam legally with proper, free and fair consultation of the affected communities, as reported on the 20 th of July, 2012 in the Borneo Post.   “It is disappointing that the CEO OF SEB thinks that three days in one area, is a sufficient period for an informed consultation with thousands of indigenous peoples who will be severely affected by the construction of the dam,” Peter Kallang, Chairperson of SAVE Rivers has said.   “Since the news leak of the construction of Baram dam about four years ago, we have been constantly on the ground, visiting over 30 of the affected longhouses, to see their views on the Baram dam. Based on our extensive consultations spanning over three years, we have concluded that most of the inhabitants do not want the dam,” Peter Kallang emphasized.   Peter Ka
Post a comment
Read more
More posts