Showing posts from May, 2013
Show All 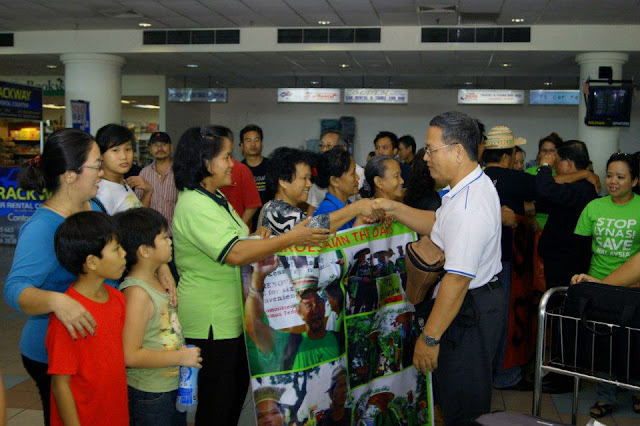 May 16, 2013
3 December 2012 Ladies and Gentlemen, The Bruno Manser Fund has learned from reliable sources that Australian national Andrew Pattle, one of the key staff seconded to Sarawak by Hydro Tasmania under a staff secondment program, has left the Taib government's controversial dams program last month. Pattle was the senior project manager of the highly controversial Murum dam, which is currently under construction, and until recently described himself as "Senior Project Manager for the proposed Baram and Baleh dams". In April 2012, he participated in a controversial "miring" ceremony held at the Baram dam site to "bless" the proposed dam. Pattle's personal linked in account says, as of 1st December 2012, that he is now Hydro Tasmania's "Principal Engineer - Civil and Dam Safety di Hydro Tasmania". The linked in entry also says that Pattle was until recently "Senior Technical Manager - Hydro Projects di Sarawa
Post a comment
Read more

May 16, 2013
30 November 2012 Ladies and Gentlemen, Dear friends, After a successful series of events and meetings in Melbourne,  Peter Kallang , Chairman of the  SAVE Rivers network, and  James Nyurang Usang,  headman from the Baram, are currently preparing for the last leg of their Australia tour in Tasmania. In Melbourne, Peter and James were hosted at the Parliament House by  Greg Barber MP  and  Sue Pennicuik MP, two Victorian Greens Members of Parliament. They give interviews to local radio stations and met with a number of church and NGO representatives from  Uniting Church ,  Friends of the Earth ,  the Australian Conservation Foundation  and others who are all very sympathetic with the Sarawak indigenous peoples' struggle for their lands, rivers and forests. Green campaigners in Australia have meanwhile identified a powerful leverage to target Hydro Tasmania by asking Australian consumers to pressure  Momentum Energy , a Hydro Tasmania subsidiary, which is sellin
Post a comment
Read more
More posts